MEIKO does more! A peek inside the development lab 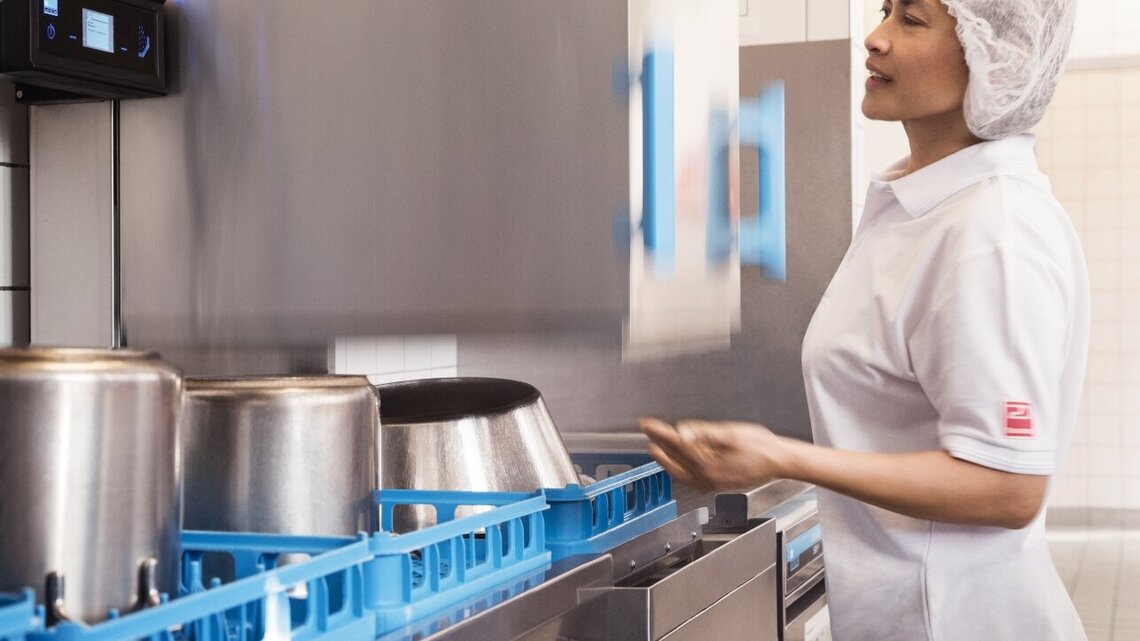 MEIKO machines are synonymous with reliability. And they can withstand a great deal. Just how much even surprises the experts sometimes. Prior to MEIKO moving an innovation into series production, it is rigorously tested again in a final quality check  - down to the last nut and bolt,  both microbiologically and mechanically, in the MEIKO development lab. And the latter in particular is not exactly for the feint hearted. This is because MEIKO insists on simulating the real conditions that prevail out in the field at the customer premises as closely as possible - even if the testing programme goes far beyond the specifications laid down in the standards for such load tests - for example with regard to repetitions.

This was exactly the case with the M-iClean H. The new feature of this model - the automatic hood system - was subjected to this final stage of quality assurance prior to its market launch in 2017. Did it pass the endurance test at MEIKO? With flying colours! "We subjected the M-iClean H to approximately 1.2 million cycles. Afterwards the automatic hood system was still working just as it did on the very first day." says Adam Bindek, Product Manager at MEIKO. The experts in the MEIKO development lab set up the test such that the hood was opened and closed approximately every 10 seconds. For half a year. Nonstop. Did any of the installed parts fail during the load cycles? Did any fatigue fractures develop in specific parts of the materials? If so, the cause was analysed and the fault remedied as quickly as possible in close consultation with the manufacturers or with the MEIKO materials research department, which tests plastics and rubber compounds for their suitability. And then the testing was continued until, upon the completion of 1.2 million successful openings and just as many closures, the load test was considered passed and aborted. "We could have continued testing without any problems." says Bruno Gaus, Development Manager at MEIKO.

But why so many repetitions? Especially in light of the fact that the standards only call for 100,000 of these so-called load changes? "The specified number was too low for us - after all, it does not represent the real conditions that we know from our customers out in the field." says Bruno Gaus. In practice, the norm is approximately 180 wash cycles per day. Therefore, 100,000 repetitions would only correspond to just one and a half years. Not enough for MEIKO! The MEIKO testing programme for the automatic hood system represents a service life of 18 years. Just to be on the safe side. The 60-month guarantee, which applies to all electronic and mechanical components in the automatic hood system, shows just how much MEIKO trusts its technology. For real functional and investment security! The M-iClean H is now in use in many restaurants, canteens and commercial kitchens - and is proving itself there every day. The hood slides down and closes automatically when the rack engages, when it is touched gently, or when a button is pressed. Silently. Reliably. Effortlessly. Taking the strain off personnel. The system has been awarded with several high-profile prizes, such as the German Chefs' Association KÜCHE Award, receiving gold in 2017 and silver in 2018. The XL version also won the Catering Star industry award, receiving the gold award in 2017 and silver in 2018. This was followed by the SCI Equipment Award, given by the FCSI association and the world's largest organizer of B2B events, UBM SES.

MEIKO does more: This does not just apply to the load tests. "Made by MEIKO" is a synonym for value and reliability. A commitment to the best technology and materials, in harmony with ecology. A promise to the customers that we will listen, think critically, and test the effectiveness and efficiency of MEIKO products again and again. Only in this way it is possible to fulfil the stated requirements and wishes, and, in the best case, even to exceed them. Because these are precisely the hallmarks of a quality supplier today. And because the MEIKO quality promise is intended globally, these demands are met equally by all MEIKO production facilities worldwide. And because it is to be understood as being holistic, it includes process and service quality in addition to product quality. In fact, clean solutions all round!

The quality promise meant that it didn't stay quiet in the MEIKO development lab for long. Because the next innovations for 2019 are already on the starting blocks - and, of course, had to face the critical examinations of the experts and the toughest conditions beforehand. And, as expected, they also met the strict MEIKO quality criteria. Wait and see!